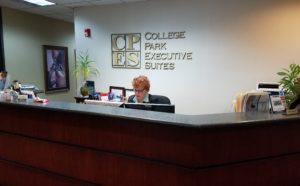 For the first time in my life, I was going all-in with my business. No longer would I be working part time and writing on the side. Now writing was going to pay my bills. All of them.

That was easier said than done. It was going to be challenging at least at first. I wasn’t from around here, and I didn’t know many business people in the area.

Who would I market to? How would I meet them?

I made one great first choice; I joined BizConnect, a business networking group based out of Norfolk but comprised of business leaders from all over Hampton Roads.

It was there that I met Jackie Gilmartin. I didn’t approach Jackie. She heard my pitch and she approached me.

Jackie said, “Have you ever considered an office outside the house?”

At the time, I was borrowing a corner of my friend’s sunroom to use as an office and I didn’t think I could afford anything else. But Jackie was friendly and low-pressure. I agreed to come take a look at her executive suites.

I didn’t know it at the time but that was the best decision I could have made for my business. The first benefit was the office. It had a door that closed. It had a desk and a chair and a bookcase, not to mention electricity, fast internet, and a fully-stocked coffee and tea bar right down the hall.

Of course, I could have gotten an office anywhere. College Park Executive Suites isn’t the only office space provider in the area, but it has one thing that none of those other places have. It has Jackie.

Jackie is a tireless champion for her renters. She’s been running CPES for more than 15 years. In that time she’s built a formidable list of contacts. When you rent from her you become a part of her business family. She tells people about your work and recommends your services every chance she gets.

When I got stuck on a project or was waiting for a source to call me back, I would sometimes wander out into the reception area. Jackie was almost always there. We’d talk about what was going on in the area or the project I was working on.

When other tenants or visitors walked by, Jackie always made a point to introduce me and tell them what I do. More than once, people approached me saying, “Oh, Jackie recommended I talk to you.”

I moved away from Hampton Roads over a year ago.

Just last month, a potential client emailed me saying that Jackie had recommended my services. When you join the CPES family, you join for life.

Emma G. Rose is a freelance blogger and copywriter specializing in education and technology topics. Find out more about her business at www.emmagwriter.com

About the Author: Emma Rose