WeWork, the former coworking juggernaut, is crashing and burning by almost every conceivable metric. In case you haven’t been tracking their progress: their initial public offering (IPO) failed, Softbank had to bail them out, and now they’re too financially strapped to afford layoffs. If all of that bad news is making you nervous about the prospect of coworking spaces in general, don’t panic. Coworking is here to stay and still pays big dividends for entrepreneurs and remote teams.

Coworking spaces owe a lot to WeWork. They exploded onto the scene and normalized the idea of sharing workspace either as an entrepreneur, a remote team, or bootstrapped startup.

At College Park Executive Suites, we’d been providing private offices to businesspeople since long before WeWork came on the scene. Watching this upstart start-up taught us that not everyone needed a private space with a door. Some people just needed a place to park their laptop for a few hours a month. Now we offer both private offices and semi-private coworking spaces where you can focus and get work done. 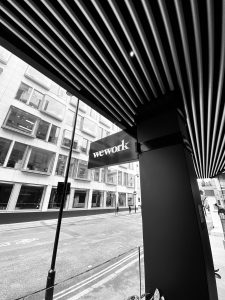 Unlike WeWork, we’re not trying to be the Starbucks of coworking, dominating every corner of the market. Instead, we’re meeting the needs of local business owners and big businesses working locally in Hampton Roads Virginia

Our decisions aren’t based on a desire to live forever, but on the idea that our tenants have important work to do and we should support them however we can. That includes free coffee, free parking, and a la carte administrative support.

Because we’re small and local, you deal directly with owner Jackie Gilmartin. In fact, Jackie acts as receptionist and office manager at CPES. Most days, you can find her greeting visitors, taking packages and answering phones on behalf of our tenants.

We Work and We Learn

We’ve learned a lot from watching WeWork. Most importantly, we’ve learned what not to do. Irresponsible growth, spaces that are more hip than functional, and an inflated sense of self importance don’t do our tenants any favors, so we’re not indulging in them.

We’re not here to bash WeWork. They’re in enough trouble without us pointing out where they went wrong, but we want the businesspeople of the world to know that whatever happens to WeWork in the coming months, we’re not going anywhere.

Stop by our office at 900 Commonwealth Place, Virginia Beach, Virginia or call Jackie to schedule a tour. We can’t wait to show you what coworking can be.

About the Author: Emma Rose